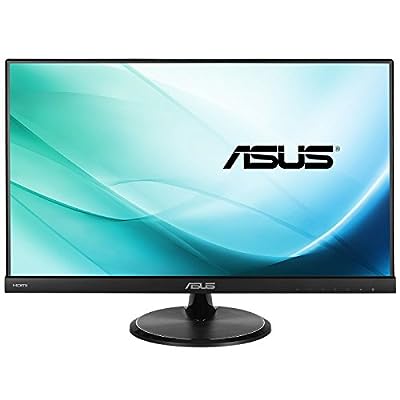 The ASUS VC239H is notable for being a reasonably priced 23″ IPS screen. IPS, or in plane switching, is the technology behind the screen, it was developed to provide superior viewing angles and colour reproduction when compared to the more common, but cheaper, TN panel type. I typically recommend 24″ and bigger screens, but this isn’t that far behind. It’s also a good looking screen, so at this price I think there will be many people looking for a monitor just like this one.

Let’s take a look in some more detail. 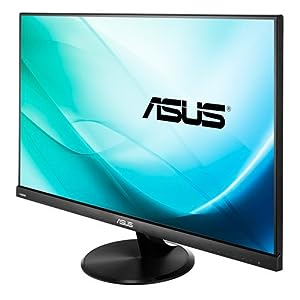 There are some things to like about the VC239H, for example the thin bezel around the top and side borders makes this a very sleek looking monitor. If you are looking for a reasonably priced near borderless display then you’ll be impressed by the circa 1mm thick border around the edges. Ideal for a multi monitor setup.

On the other hand, I’m not such a fan of the clunky stand, I don’t think there is anything particularly elegant or practical about it. But each to their own, you may be more forgiving than I am. The matt screen is also prone to finger marks but once you get it in position that shouldn’t be an ongoing problem for you unless you have a habit of pointing things out, it’s less of a problem when the screen is on.

Monitor setup is done via a set of controls on the under side of the lower bezel, these are real buttons which personally I prefer to touch sensitive type inputs which don’t always register. More premium monitors can come with a joystick control or separate control module but you don’t get that here of course.

You can hook up a PC or console using the HDMI port, there’s also VGA and DVI if you’re that way inclined. A headphone socket is also included for when you want to hookup those headphones. 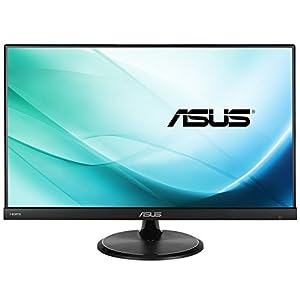 The ASUS VC239H features an IPS panel which provides high quality colour reproduction. This is a big plus for the monitor, IPS often means a high price tag but the ASUS is still in the lower price bracket. The viewing angles are also top notch as to be expected, the IPS quality really shines through here.

IPS screens tend to be less responsive than the cheaper TN panels but a 5ms response time means that it is very much suitable for gaming. Note that some users have noted minimal back light bleeding, chances are you won’t get this or be bothered by it but it’s worth a mention.

You also get the GamePlus feature which is normally only found at the ROG Swift range. How useful this is to you I can’t say, FPS gamers might like the cross hair feature but you’ll have to toggle it through the menu system.

We give the ASUS VC239H a 5 out of 5 rating. Want to know what existing owners of the monitor think? You can read real user reviews here.
Updated: 30th June 2016

The ASUS VC239H is a low cost 23" monitor which features an IPS based screen for superior viewing angles and colour reproduction. A 5ms response time means that it is also suitable for gamers. If you are having some doubts about this purchase then why not read some real owner reviews and see what other buyers think.

Welcome to the ASUS VC239H FAQ. This section attempts to answer common questions you may have, please get in touch if you have any more queries or if you think our answers need updating.

Does the screen have a matte or gloss finish?

The screen has a beautiful matte finish.

Are the speakers any good?

As with all monitor speakers they will never compete with a top notch hi-fi, but if you need sound then they are better than having nothing at all. Gamers will most likely want to plug in their headphones.

Is it height adjustable?

Sadly no, you would have to place it on a raised platform if you want more height.

We've just launched our FaceBook page, please come and like us!
Note: Whilst we attempt to include up to date information in all our articles we cannot guarantee accuracy. Please check with your supplier before making any purchases. In most cases we do not have access to products and these are not hands on reviews.
Release Date: 25/06/15
Brand: ASUS
Model number: 90LM01E2-B02470
Price Updated: 28 Aug 2019 13:46